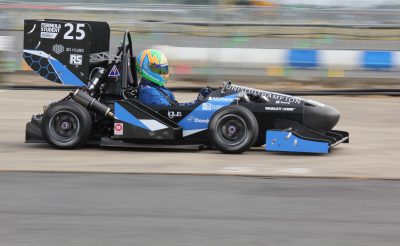 Formula SAE is an annual engineering student competition taking place all over the world. The race attracts teams from the world’s best technical Universities who have 9 months to design, manufacture, and compete with a small Formula-style race car.

When they had to manufacture parts with tighter tolerances than they ever needed before (as tight as ± 5 microns), the Southampton University Formula Student Team (SUFST, for short) turned to Online Manufacturing with 3D Hubs to source critical parts of their suspension system. This way they got access to advanced CNC machining capabilities that allowed them to drastically increase the reliability of their car and to achieve their best season yet.

Watch Pau Miquel, SUFST’s Chief Designer, describing the function of the parts they manufactured and keep reading if you want to learn more detail about their journey.

SUFST, founded in 2012, is a Formula Student team from Southampton, UK. Their first formula race car - the STAG O - was ready to compete in the Summer of 2013 and they have been racing every year since in national and international competitions.

Despite being young, the engineers of this team are highly ambitious and talented. Their senior members have years of Formula Student racing experience and a lot of hands-on knowledge gained by working for some of the biggest names in motorsport, like Red Bull Racing, McLaren and Force India.

Last year, the team managed to complete for the first time the Endurance Event of the Formula Student competition with their STAG V. The Endurance Event is a 22 km race that pushes the car to its limits and completing it is a huge achievement, as about 50% to 75% of all teams never make it.

The improved reliability of the suspension system, brought by the high-precision parts CNC machined by the manufacturing partners of the 3D Hubs network, contributed greatly to this achievement. Let’s see how they did it.

The Formula Student competition is a true engineering challenge! The young engineers have to solve real-life problems and optimize the performance and reliability of their car while making the necessary compromises. Here are some of their main design restrictions they have to take into account:

Of course, some components have a complex geometry or technical requirements that surpass the skillset of the students, who are usually only allowed to use manual machines. For these parts, SUFST used to locally outsource the manufacturing before they decided to work with 3D Hubs.

The subsystem with the most challenging to machine components is the suspension system, which connects the wheels to the chassis of the car. The components that the SUFST team needed to outsource were the wheel hub, the upright and the wheel nut. We will examine each of them.

The hub is the component that connects the wheel and the upright which is attached to the main body of the car. The hub rotates with the wheel, while the upright needs to stay stationary. To do this a bearing fits between the two. The fit of this bearing is crucial for performance and reliability.

The young engineers of SUFST learned the hard way that tight tolerancing is essential here. In the past, the fitting of the bearing caused many reliability issues during the race. The team traced these problems back to the loose tolerances and rough surface finish of their old hub and upright.

After consulting with the bearing manufacturer, they determined their technical requirements: a dimensional tolerance of ± 5 microns and a surface roughness of Ra 0.4 μm were needed. These very high precision requirements were beyond the capabilities of their local machine shop.

So, the team decided to take advantage of the 3D Hubs global network to fulfill their manufacturing needs. Using Online Manufacturing allowed them to get access to advanced high precision CNC machining quickly and easily.

The wheel nut is a humble component that serves a very important function in a formula race car. Pau Miquel explains:

The wheel nut keeps the wheel in place. For safety reasons, it has to meet very strict requirements. We decided to go for this custom single nut design because it allows us to change our tires quickly between events during the competition.

This came handy when we woke up and saw the track completely wet on the day of the competition. We were completely confident though that we could change from dry to wet tires very quickly and easily right before the race if that was necessary.

The rules state that the wheel nuts must be in pristine condition and 3D Hubs delivered: after machining the nut in a 5-axis CNC mill-turning system, the nuts were anodized purple to achieve an aesthetically pleasing and abrasion resistant finish.

One of the reasons we liked working with 3D Hubs was the Customer Service. This was something we have never experienced before. It was almost surprising and shocking - in the best way possible - when an issue during production was identified and resolved by the 3D Hubs team even before the parts arrived.

Preparing for the future

The engineers of SUFST are currently working on finalizing the design of their next year’s race car. Having solved their major reliability issues, the team now focuses on increasing the performance of their next car - the STAG VI - by reducing its weight. They are also performing a lot of testing on this year’s car to inform next year’s design.

3D Hubs’ role within this is to expedite the development process for these highly talented engineering students by giving them a platform where they can source without hassle the most challenging to manufacture components of their car. This way they can keep spending their time on what matters the most: honing their engineering skills by building the best formula race car possible.

Or start uploading your parts today to get an instant quote.

Online manufacturing trends Q4 2018
The new Online Manufacturing Trends for Q4 2018 has been released.
Next