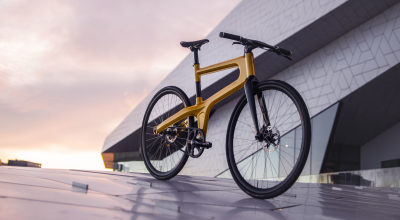 In the Netherlands, about 27% of all journeys are taken by bike yet the bikes being used are predominantly manufactured overseas. For Mokumono this was a symptom of an inefficient and outdated method of production. The resulting environmental impact and stagnation in innovation led the brothers to begin looking for an alternate solution.

Lessons from the Automotive Industry 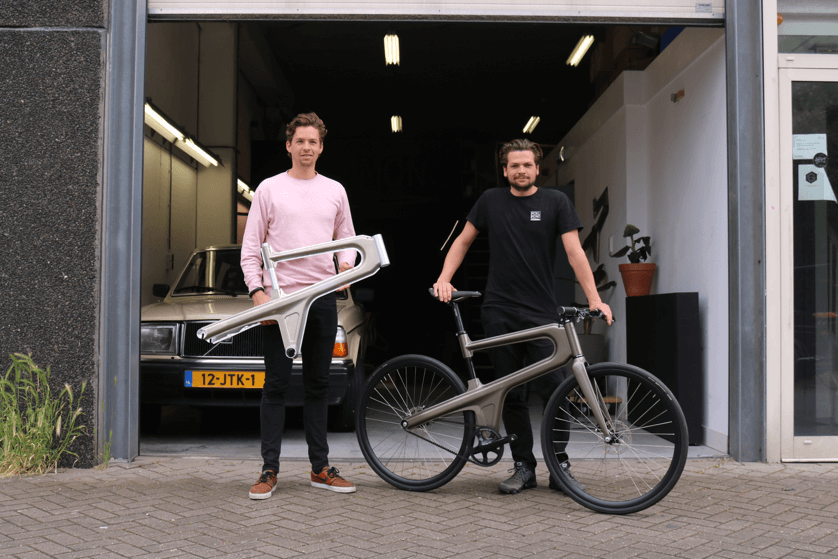 To bring manufacturing closer to home Mokumono needed to find new techniques that would require less manual labor. Labor cost is a key factor in pushing production overseas, reducing it means production can stay in the Netherlands. The automotive industry has managed to keep its production in Europe, thanks to high levels of automation used in their factories. Using sheet forming and automated welding allows cars to be built efficiently and without lots of manual work. Taking these learnings Mokumono applied them to the way they make their bicycles which result in their first bike, the Delta.

Traditionally when a bicycle is manufactured it's using steel or aluminum tubing. This tubing is then hydroformed to create the desired shape, tubes are cut and then begins the process of assembly. Hand welding then begins to bring all of these small parts together. On top of this long process, you have to mitigate the side effects of putting so much heat into the metal which can cause warping. The final step is to straighten the frame and perform a heat treatment on the metal to relieve any stresses caused by the welding.

From first concept to production

With Mokumono they are pioneering a new form of manufacturing whereby two sheets of 7000-grade aluminum are pressed into form and laser welded together. Using just two formed halves joined around a head tube, seat tube/bottom bracket and drop-outs, the welding is simplified and streamlined for automated production. Using automated laser welding means the process is faster and requires less work. The speed of laser welding also means that less heat is put into the frame so less post-processing is needed. The number of components is also significantly decreased as you are only using two sheets of metal instead of tens of processed tubes.

Going from an initial sketch, Bob built the first prototype from cardboard to get an idea of how the frame could look. The next step was building something more representative so the next two iterations used 3D printing with a steel frame. The final prototype was hand built from aluminum and is the outline used for the production model today. 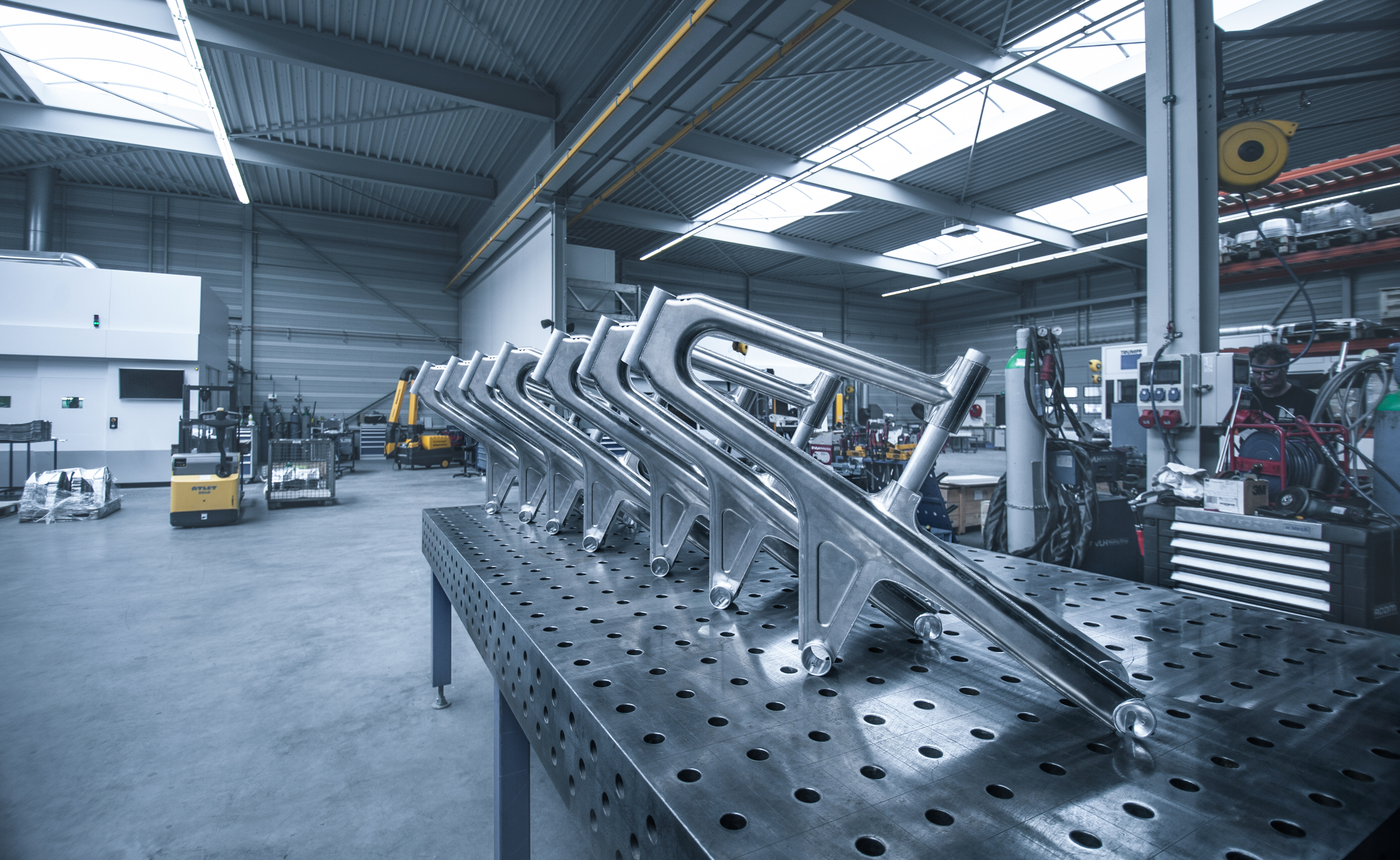 To get the project off the ground a successful Kickstarter was funded totaling €92,000. The success of the Kickstarter campaign was a proof point that this new manufacturing method that enables local production resonated with people. To fulfil these first customer orders that came through the campaign Mokumono needed to begin production. Bob explains how they came to use 3D Hubs:

I was having a tough time getting a price for the parts I needed. When I did get a price it was really expensive and the lead times were months. After using 3D Hubs for 3D printing and seeing they added CNC machining I decided to check it out. Immediately I could see prices and the lead time, this was perfect for me. I didn't have to waste my time on finding and managing a supplier, I could just submit my order and get my parts all on one platform. 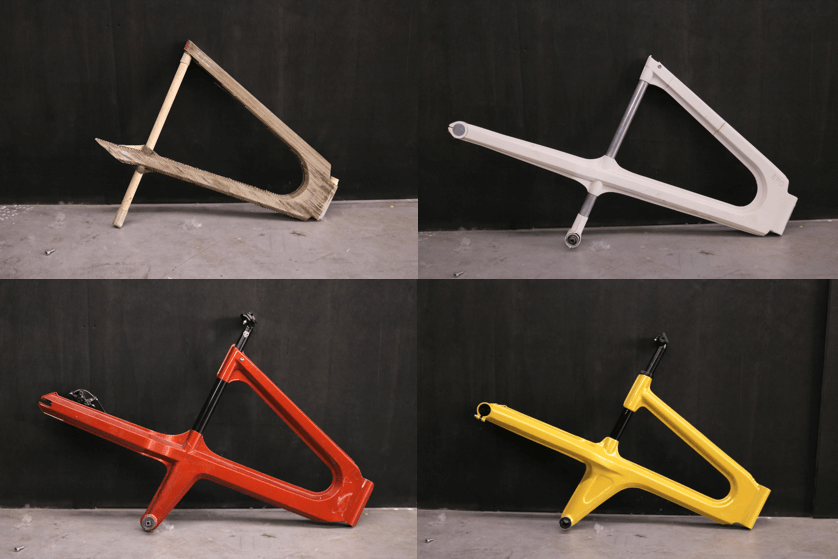 Mokumono designed the Delta bicycle to showcase the manufacturing technique, using sharp lines accentuating the points in which the two sheets are pressed together. Bob wanted people to know the bicycle was made of two halves. With the pressing technique, you get a lot of form freedom but it does come with its limitations too. When designing the rear triangle of the bicycle it got extremely complex as it was a difficult part to design to be pressed. In the end, Mokumono created floating rear stays to navigate this challenge.

Currently, all the parts are sourced with Dutch manufacturing companies and assembly is done in-house by the Mokumono team. Keeping it in the Netherlands, Mokumono used 3D Hubs to source their manufacturing needs. From early-stage 3D printing to CNC machining for their first production run. Two key parts 3D Hubs manufactured for Mokumono are the points of connection for the two pressed sheets. The material used for all the part ordered was Aluminum 6061 as its strong enough for the job and the most affordable. As the parts are being painted and post processed an as machined finish was used.

The bottom bracket shell makes sure the axle is off center so you can tension the carbon-fiber belt used on the Delta. There were no standard tube sizes for this component so CNC machining was the most cost-effective way of doing a short production run. 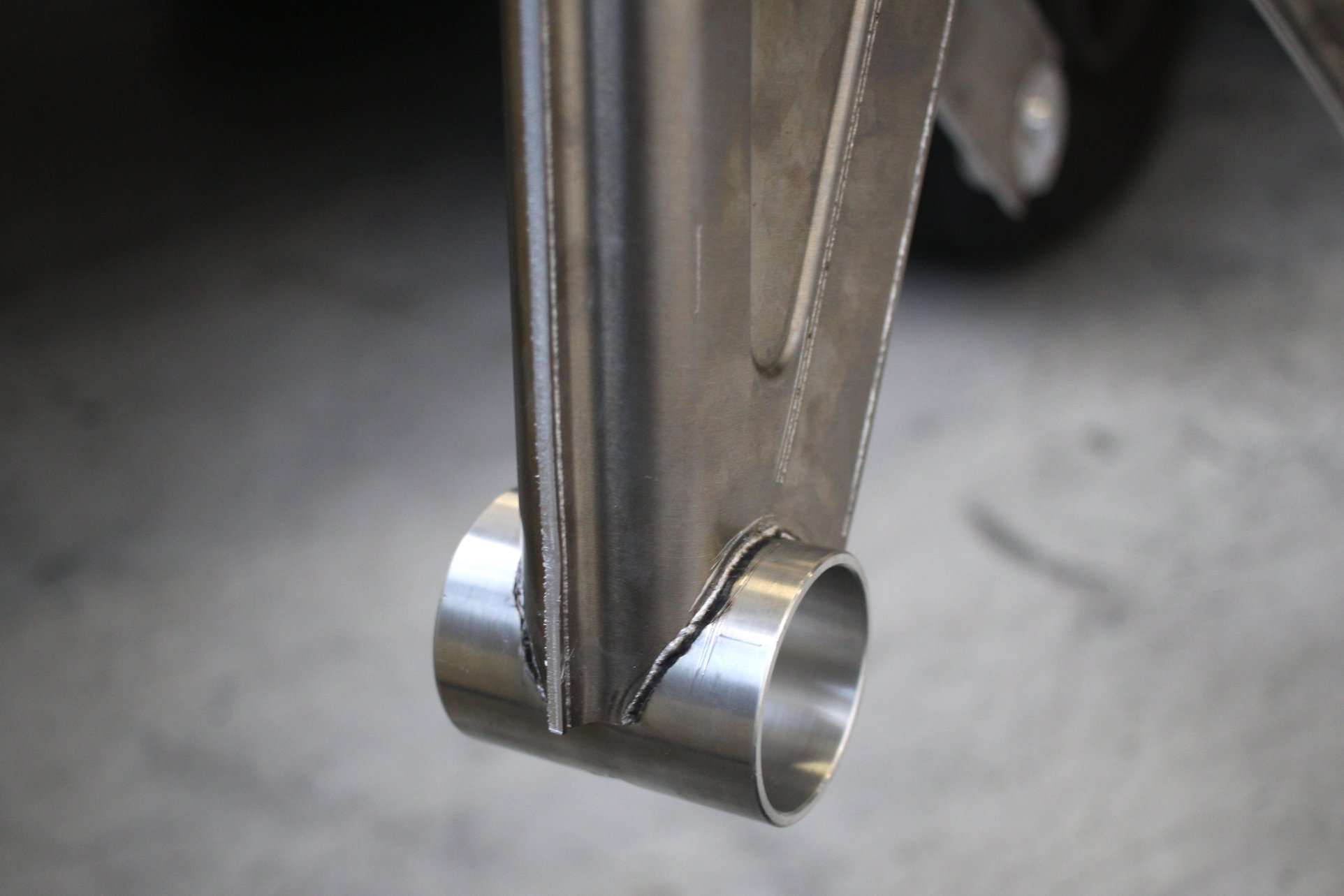 The dropout is a structural part of the bicycle that operates as a fork end, allowing for the rear wheel to be removed without removing the belt. To add a custom finish to the bicycle the company name was engraved into the part. 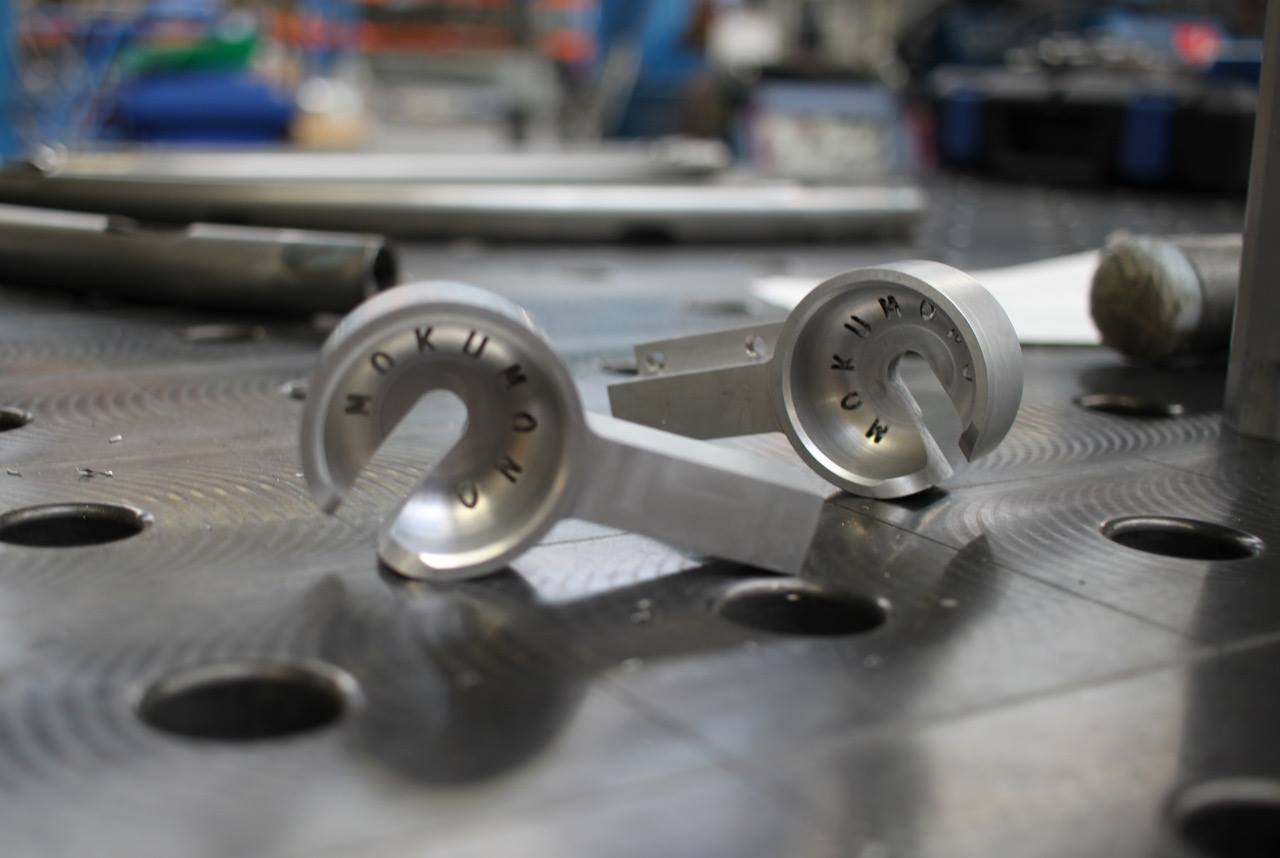 Going in the right direction!

The industry is paying attention to Mokumono’s innovative approach. They were awarded the Gold award at Eurobike 2017 and leading Dutch manufacturers are inquiring about their technique. The Mokumono Delta served as a brilliant demonstration of this new way of producing a bicycle. The future of Mokumono is about bringing this technique to the masses to fulfill their ultimate goal of localized production. If the momentum continues as their initial backers get delivery of their bikes, it could very well happen. 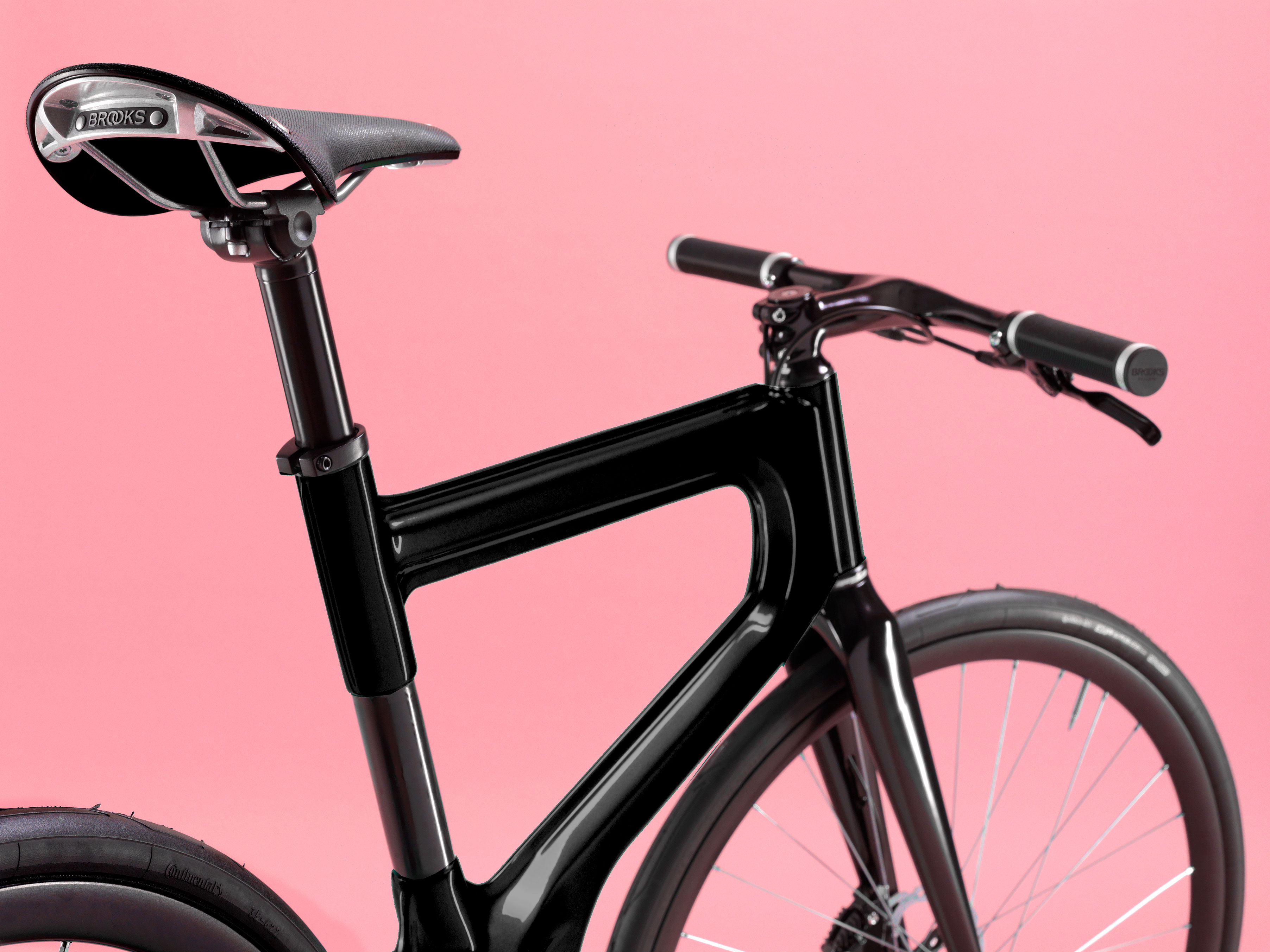 ⚡Or start uploading your parts today to get an instant quote.

Learn how Kepler rapidly went from a sketch on a napkin to a satellite in space with 3D Hubs CNC machining
Getting a satellite into orbit is not an easy task, especially when you’re trying to do it in 12 months with a strict budget in mind and for the first time.
Next

3D Hubs student grant 2018 winners announced
3D Hubs is today announcing the three awardees of the second 3D Hubs Student Grant. After the success of last yeat the grant has had another excellent reception from students from around the world.