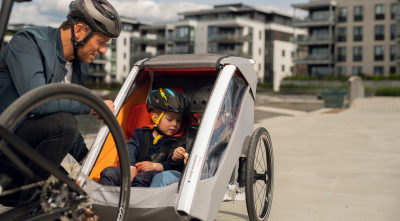 Thor Hushovd, Norwegian former professional road bicycle racer, spotted a gap in the market for children’s bicycle trailers. He wanted to focus on easy usability and storage, which drove him to create a sideways folding bicycle trailer, and approached Inventas, a product design agency, to bring his fresh idea into reality.

The core feature of the design would be the sideways folding mechanism. From this starting point, Inventas’s next design and material decisions were steered by Thor Hushovd’s target customer: sporty people into their high quality gear.

Based on this information, Inventas created their first concept sketch, concentrating first on an overall vision of what the trailer could become, rather than the details.

Making the dream a reality

Step two was to figure out how to bring the sketch into a reality, which came with several challenges:

Inventas built several prototypes, first from cardboard and later by modifying existing bike trailers, to test out this mechanism, and in the end settled on constructing the frame first, before shaping the fabric.

The bearing structure was also critical for the project, but this was easier to test with simulations in SolidWorks in the early stages of the process, rather than building physical prototypes.

In order to visualize the finished product to the client, Inventas used VR to give a clearer idea of the size and proportions of the trailer.

Later into the prototyping stage, Inventas made use of their three in-house 3D printers. “It’s a super easy and fast process for us,” comments Gregoire Bonnemaire, Senior Designer at Inventas, “we set up a print in the evening and it’s ready to test out the next morning.”

However, if the Inventas team wanted to make larger parts or parts out of specific materials, they sourced them through an external supplier. An example of an outsourced part is the handlebar adapter which they ordered through 3D Hubs.

Inventas decided on injection molded glass-filled nylon (PA6-GF30) for the handlebar adapter due to its high strength-to-weight ratio and low price.

In addition to these custom parts, Inventas also decided to outsource some components like the seatbelts and tires. These meant they could save time by cutting out the testing and certification process required for these parts, and include top brands like Holmbergs and Schwalbe, known for their quality - and a good match with their target audience.

Semi-rigid EVA foam was used to construct the side panels, providing children with greater comfort and a more roomy interior, while maintaining its shape. In total, the finished product included around 30 different components.

Speed was critical for this project to meet the client’s deadline. “The instant quoting, direct Design for Manufacturability (DfM) feedback, and short lead times from the 3D Hubs platform, really helped us get custom parts faster,” shares André Ingolfsen, Project Manager at Inventas, “We also found it extremely useful having one dedicated person at 3D Hubs to check the status of our orders.”

3D Hubs’ distributed network of 240+ manufacturing partners with over a hundred materials on offer, also meant there was always available manufacturing capacity. Inventas wasted no time finding an available supplier that provided the materials they were looking for.