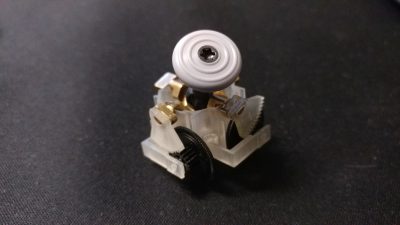 It’s problem that most fans of Nintendo have faced, your two hours deep into a Super Smash Bros session on the Nintendo 64 with your friends then the controller joystick gives way. This abrupt end to play due to poor manufacturing has caused much sadness, but one student has taken control into his own hands.

Nam Le, a student from California Polytechnic University and fan of retro video gaming was sick of  hunting down replacement controllers every two months. To solve the problem himself he reverses engineered nearly 20-year-old components by hand and redesigned the entire joystick system from scratch.

Bringing the new to the old, Nam used 3D printing and worked with 3D Hubs to create what could possibly be the world's most durable N64 controller.

To begin the project, the first hurdle Nam faced was the lack of documentation on the components, how they interacted and how to assemble them. The first step was disassembling the controller and hand measuring all the individual components. The reason for this was that there was no way to buy new components with the controllers no longer in production.

This entire process from measuring to CAD files took around 3 months to complete, an especially impressive feat since Nam had only taken a basic introduction class to 3D modeling prior.

Whilst simulating the components working in Solidworks Nam found that the main manufacturing flaw in the controller was that the entire joystick assembly would wear down, causing failure. Nam breaks down the assembly:

This assembly was made of three key components the gears, stick, and bowl. The gears wore down from the mating surface of the stick, the bowl wore down making the joystick offset from its main axis and the stick itself would wear due to abrasive dust.

With this in mind, Nam focused his attention on making the new components as sturdy as possible with an option to easily replace the joystick (the central point causing the other components to break). The next step was the material selection and finding a manufacturing process for custom production.

3D printing was the obvious choice for manufacturing. Its the only method that allowed Nam to develop the idea iteratively whilst being affordable. The materials and processes available also allowed for the creation of small highly detailed components and components with high hardness.

The gear teeth were made from  Visijet M3 Crystal material thanks to the high detail that could be achieved. The main body of the gear was made of brass using the lost wax casting method using 3D printing. Like the gear teeth, the Visijet M3 Crystal material was used for the housing since it would have been too difficult to cast the whole bowl by itself. Again the main bowl is made of brass like the gear body.

The redesigned stick was made of nylon (PA12) using SLS technology. Nylon was used since it is not as hard as the other brass parts. Nam explains his material choice further:

Generally, harder materials won't be worn by materials of a lower hardness. The result is having only one part wear compared to every old component wearing. Every once in a while the stick will have to be replaced, but it takes a longer time to wear and is a better cheap alternative than buying a new controller.

Nam’s current prototype has already last 100% longer than the original Nintendo controller, with 6 months already through with no signs of breaking. The gaming community at large has taken to his idea with pro Super Smash Bros players wanting to test it and the controller being deemed tournament legal.

The repercussions of this complete redesign go beyond just a new controller for Nam but with an entire community interested in this more sustainable way to retro video game. The future of the project is that Nam hopes the community can leverage his new idea to bring life to broken devices.

As the idea gets more popular he may look to use CNC machining for some of the components thanks to CNC's affordable metal materials. No other controllers are in sight for Nam, but who knows what the future holds when it comes to bringing modern manufacturing techniques to old manufacturing problems.