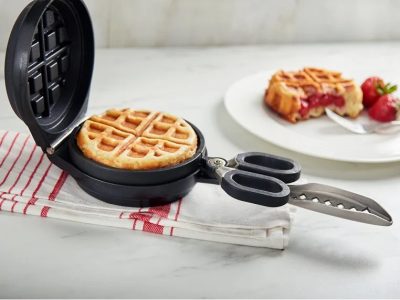 Mike Bradford, inventor of the stuffed waffle iron and owner of his company Wonderffle, which sells patented consumer stovetop waffle makers, wanted to make a new model with swappable parts for different waffle shapes to be used in the commercial sector.

He started to work on the commercial electric model in April 2020, but needed to drastically cut back costs due to the coronavirus pandemic. The additional units he ordered before the crisis were stuck in production. With his inventory out, Mike’s revenue took a hit, and he looked to 3D Hubs to reduce prototyping costs.

Before creating anything, Mike first bought and took apart affordable, sometimes secondhand, waffle irons already on the market to measure the sizes and dimensions of the individual parts.

With a good knowledge of the designs that were already working, he started creating some rudimentary designs on Autodesk Fusion 360. He then got to work designing the 3D printed parts. “The goal of the 3D printed parts, for me,” shares Mike, “is not to make a full scale design model. It’s more to look at how the parts will fit together. After testing them out, I’ll then go back and refine my designs of those 3D prints.”

Mike then started designing parts to be CNC machined and outsourced production to 3D Hubs. “It’s not uncommon for me to have to do two rounds of CNC,” explains Mike, “That’s what happened this time I had the CNC parts. I used the device and realized this wasn’t going to work well.”

For the CNC machined parts, Mike chose Aluminum 6061-T6. “It’s soft, cheap and abundant, but no one wants to directly eat off an aluminum piece, so the food safe coating is very important,” adds Mike. He outsources the coating process and uses Whitford Xylan Plus nonstick coating for cookware on the interior and exterior.

For end parts, aluminum isn’t recommended as a food safe material, but it can serve as an affordable material for prototyping.

Aside from food safety, user safety is essential for this product. The majority of the device is made from metal parts that are exposed to heat. The handles therefore need to be designed in a way so that they avoid direct heat, from a material resistant to heat, to help the end user refrain from burning themselves.

“On one of my models, I realized the handles were too close to the body of the waffle pan and the nylon on the handle would melt,” outlines Mike, “so I needed to tweak the design for that.”

“Prototyping is expensive,” shares Mike, “and I don’t really know a cheap way to do it on this type of product, especially when you have to have a working device made out of metal that you need to apply heat to, so anything I can do to reduce costs is a big advantage and 3D Hubs has been able to help with that.”

Before outsourcing his parts to 3D Hubs, Mike had calculated the original cost of the prototyping project to be around $15,000. His new projected spend with 3D Hubs is $8,000.

3D Hubs’ instant quoting tool has helped Mike realize the large price difference between different CNC machining part designs. “Machining out lots of material can drive up the cost,” explains Mike, “although it does of course come with advantages like a lighter weight and lower heat retention.”

Mike summarizes, “As well as saving 40% of my prototype order costs, 3D Hubs also serves as the team of developers and mechanical engineers you need to bring a product to market as an individual.”

Once a working prototype is complete, Mike will send it to his manufacturer who will make some finishing touches of the design to make a master prototype model suitable for mass production.

The manufacturer will also calculate the cost of mass producing the device. “In the final model, we’ll injection mold all the plastic parts instead of 3D printing them,” adds Mike, “and we’ll probably sand cast most of the metal parts and use stamping for the sheet metal parts. All the electrical parts will be bought off-the-shelf.” Once he has an estimated cost, Mike plans to pitch the device to restaurants and food services.